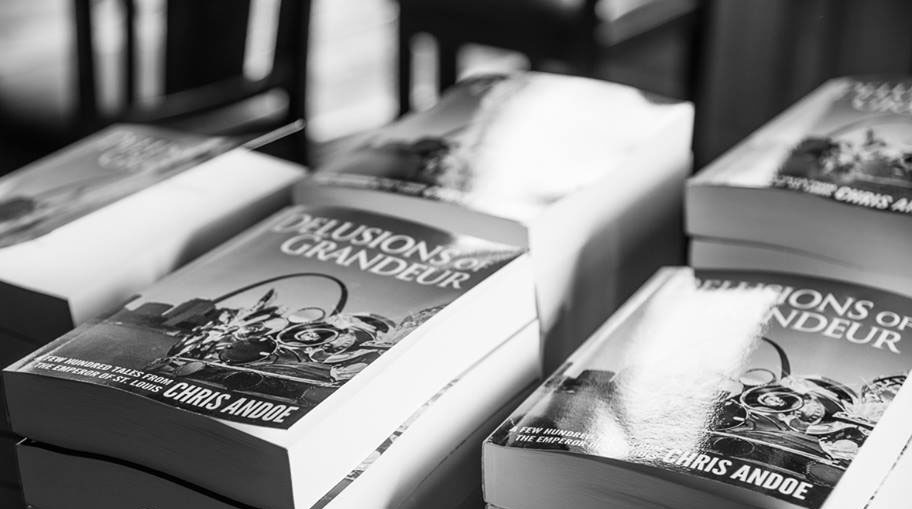 Acclaim for Delusions of Grandeur

“St. Louis has offered the world a variety of artistic gifts, from the Oprah-inspiring poetry of Maya Angelou to the scintillating star power of Tina Turner. But in choosing it as a playground and battlefield for his epic exploits, Chris Andoe has ensured for the city a twisted new chapter in our shared cultural history. No wonder they call him “The Emperor.” – Paul Hagen, Metrosource

“Not since Charles Bukowski have I found myself so submerged into the life and times of so many colorful characters. Acclaimed writer Chris Andoe brings a modern flair to such a missing style of literature today. I felt intrigued, enlightened, dirty, amused, outraged, betrayed and in awe of all that is Delusions Of Grandeur.” – Karla Templeton, Vital VOICE

“Andoe is one of the most compelling characters I have met in a long time, actual or literary.” –  Airek M Beauchamp, Ph. D.,  Arkansas State University

Oklahoma native Chris Andoe has lived from San Francisco to New York, but for nearly twenty years has remained captivated by the drama, culture, and tragedy of the haunted old river city of St. Louis, a place he’s likened to Sunset Boulevard’s Norma Desmond, simultaneously celebrating yet mourning a glorious past. Delusions of Grandeur is a compilation of tales and snippets of many lives and characters whose stories entertain standing alone and enrapture woven together. From a deranged con man penetrating the highest reaches of state politics to shocking headlines of a ‘human slaughter chamber’ on the East St. Louis riverfront, Andoe has collected and craftily chronicled the whole spectrum of the St. Louis LGBT community and beyond, and the outcome is nothing short of page turning.