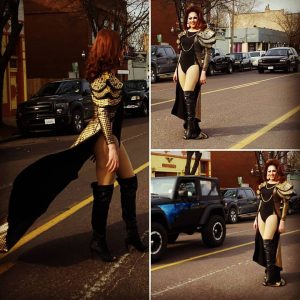 Queen of Controversy Janessa Highland showed up to a benefit this week and was told she wouldn’t be allowed to take the stage unless she made a public apology for sharing her story about the venue’s dressing room ceiling collapsing on her head, and for airing her complaints about the crumbling back wall that allows rain to pour in and mold to grow.

“It would behoove you to reach out and apologize” another entertainer suggested.

“Over my dead body!” Highland replied.

Maintaining our LGBT community’s  tattered facade is critically important for an entertainer, lest you get blacklisted, and often critical to that task is covering for the bad behavior of others. But the veneer was ripped off this past week as controversy swirled over Pride’s proposed admission charge, unleashing a flurry of strong opinions and bold proclamations which made it seem for a moment that Highland’s bold style was suddenly in vogue, even if we all knew better. 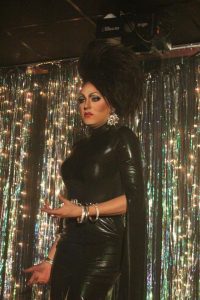 One of Pride’s media partners took to Facebook for late night rants about conflicting drunken directives and claims of contracts being terminated, while  behind the scenes reaching out to shore up the support from former foes in the event the organization bit back (even while allowing those former foes who assured him support to be trashed by Pride’s attack dog on his own thread). Others who do little else than condemn the Facebook drama of others were suddenly in they eye of the storm, posting their own drama filled statuses about what they claimed to have seen and heard.

Now that the dust has settled, a compromise has been reached, and everyone appears to have made nice for the time being, I reached out to Highland, the villainess many in this city love to hate,  to get her thoughts. I told her I found it noteworthy that she didn’t have much to say during the uproar.

“That’s an issue I just stay out of unless it involves me personally because I just don’t care enough, but yes, every year I’ve performed for Pride for free and they’ve treated the queens like trash.” Highland began. “I’ve gotten into it with them every year.”

Highland brought up the conflict-plagued VIP tent, where she and the Queen of Pride were turned away last year.

“They said it was because the tent was closing early due to the rain, but while arguing with us they kept letting others in.”

She said entertainers then tried to get backstage to gather their drag before the rain hit, but were denied entry until the main act was no longer on the stage.

“We asked to just retrieve our items so they did not get ruined. We were barred from entering back stage until another Pride member spoke with the headliner who was surprised we were being denied access to our items.”

“I miss the days when drag was about advocating, entertaining and being the voice for those who may not be able or willing to speak up. I’m worn out by the politics and St Louis’ demand that everything remain politically correct. Drag was never intended to be politically correct. Drag queens throughout our LGBTQ history have been the first to stand, the first to throw bricks, the first to push the boundaries and demand acceptance for not only themselves but the community as a whole. I’m not sure what has happened. I’m not sure where we got lost, where the activism and outspokenness has disappeared to. I’ve always been loud, blunt, and headstrong. This has allowed detractors to paint me as the ultimate villainess, which I jokingly accept and even perpetuate at times. In reality it’s exhausting. Anyone who has taken the time to get to know me can tell you I may have a sharp tongue, but it comes from having a passion few others rival. I want the best for all of us, and until we all speak up issues of mistreatment will never be addressed.”

The irony is Highland,  who between her outspoken ways and deranged fans is known as high drama, has found a safe haven in the bars famous for being low drama, including Bar: PM and Bubby’s.

“I am lucky to have some very close sisters and am privileged to work at some amazing venues who have opened their doors to me and accepted me as I am, controversial moments and all. I can not express enough my gratitude to Bubby and Sissys, The Bastille, Martha’s Vineyard, Bar Pm and the other venues that invite in and allow me to be myself.”

This past week was indeed fascinating, but it’s easy to speak your mind in the safety of an angry mob. Queen of Controversy Janessa Highland speaks out when it’s neither safe nor comfortable, which is why I wanted to give her the last word on this tumultuous week.