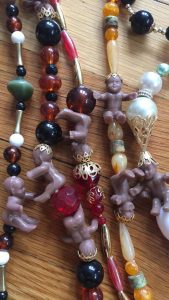 I knew Illinois Route 3, just across the river from the Gateway Arch, was steeped in history. There’s of course LGBT history, which included a popular hangout in the fifties called the Olde English Inn, and there are the infamous dens of iniquity some people have long slinked to at all hours along the route. I was aware that the road runs through Alton, site of the Lincoln-Douglas debates, and Brooklyn, the oldest town incorporated by African-Americans in the United States. But I realized my historical understanding was a mere inch deep the morning Archaeological Illustrator Glenn Baker, who just completed the illustrations for Mark W. Leach’s upcoming book The Great Pyramids of St. Louis, gave me a tour of prehistoric St. Louis.

It turns out, where Route 3 runs, a road existed for more than a thousand years, and it’s just one of several in the region with similar pasts including Gravois, which led to mounds in the Fenton area, and Collinsville Road, which Baker says has been used “since man first entered the valley.”

Showing me his illustrations of the American Bottoms, which is the name of the flood plain that runs along the Mississippi in the Metro East, Baker explains, “To understand the roads and access points you have to understand the old map of the Bottoms. These maps show all the known mounds. Where they are grouped together are the main towns. The road sites were important because they ran on high ground along the oxbow lakes that existed then in the American Bottoms. I tend to think of the area like the Valley of Mexico, teaming with towns and villages connected all together by these waterways. It would have looked very much like Lake Texcoco (Site of present day Mexico City where the Aztecs built a city on an island). It’s clear that people came from great distances to Cahokia. This was an important commercial center and religious pilgrimage site.”

One of the things I love about this region is the seemingly infinite layers upon layers of history. Before we were the largest city west of the Mississippi and the 4th largest in the nation, before we were part of the USA, before we were part of the Spanish or the French empires, before European explorers set foot on North American shores, one of the world’s great cities rose right here, at the confluence of two mighty rivers. Cahokia, as it’s now known, was the Manhattan of its time, larger than London in AD 1250, and few know it better than Baker.

“It’s important for people to know that Monks Mound (the crown jewel of Cahokia) is possibly the 5th largest pyramid on Earth—that makes it a serious archaeological site—and there were seven large towns and many smaller settlements connected by well-maintained roads and causeways over a site that spans from Chesterfield Valley to Lebanon, and from Grafton to Dupo. It was as large in scope and scale as any city in Mesoamerica.

Born and raised in the Central West End, Baker left for Houston where he spent twenty years working for their chamber of commerce, and then spent a decade doing similar work in San Francisco. When he retired, he returned home.

“Like many St. Louisans we come back. It’s like umbilical whiplash, it’s as if there was a brick missing and I was just slipped back into place in the wall.” Baker says, before quoting St. Louis native T.S. Elliott: “And the end of all our exploring, will be to arrive where we started, and to know the place for the first time”

It was after his return that he attended a screening of a film about ancient St. Louis, and while he found the subject matter fascinating he was dismayed that the film completely lacked imagery of what this place might have looked like.

“…and there was nothing …nothing that had ever been done to show what it looked like inhabited, which is why I drew the first drawing of the St Louis Mound Group for the Mound City Archaeological Society. I’ve adapted it later and have maybe done fifteen more drawings since then all of sites and aspects of sites that had never been illustrated before. It was my interest really in knowing what it all looked like based on the data we knew. My goal was to recreate them in a way that would show them as they were. So I could see this lost world as it was. To recreate it and to see it again.”

There was no larger city in what’s now the USA than Cahokia, and the great mystery is why it was abandoned around AD 1300. Baker draws the parallels between past and present, and between the two audacious symbols – Monk’s Mound and the Gateway Arch.

“Why Cahokia is a mystery, it is not just in the past, but it’s an omen for modern men, to sit on the top of Monk’s Mound and look back at St Louis and the Arch and the Great Rainbow Gate we raised up. What drives men to raise up these monuments? It tells us our end will come as well, and all our glory will be lost. It’s a window in time.”

Baker also thinks this storied ground feeds who we are to this day.

“There’s something spiritual about this place. Cahokia is a sacred site and we are right on top of it. Maybe why we are such a haunted, brooding complicated bunch of humans.”

While there’s so much we still don’t understand about prehistoric St. Louis, thanks to Baker we can begin to picture it.

“Strange, but in a way I traveled back in time. There it was, this enormous lost city, the very center of the world, and a sacred place which exerted tremendous power of over the whole of what is now the Eastern United States. In my mind I see it. The first thing you would have seen in the distance is the smoke rising up from it, then the mounds and the villages, the cultivated fields, the fleets of canoes, the great causeways and roads thronged with crowds of people, the vast walls that enclosed it. It was painted with gaudy colors as where its citizens, then at the center is this huge pyramid that rivals anything on Earth, the sheer power and glory of it, a whole lost civilization, not in Central America but here in our back yard. I hope my drawings let others to see what they never knew existed here, that when they see them they are filed as I am with the same wonder and awe.”

The love Baker has for this place is profound, as are his gifts to us all.

“I have put in my will that if I die here in St Louis, I want my ashes spread on the wind from the top of Monks Mound. I’m very romantic.”